Getting an appropriate behavior from a child. 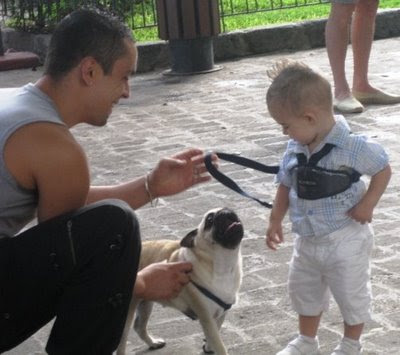 Many parents have difficulty in saying ‘No’ to their children. Bad behavior in children is the result of over indulgent parents who cannot cope with their children’s demands and are willing to give in readily instead of spending some time in explaining their reason for saying ‘NO’

According to a new research, it is found that the teachers are dealing with a "small but significant" number of pupils who throw tantrums in class if they don't get their own way, turn up exhausted because they stay up late and have increasingly "belligerent" parents who take their child's side.

"These parents, themselves under social pressure and often unable to deal with their own children's behavior, could be highly confrontational, sometimes resorting to violence in protecting their children's interests," the Cambridge University study, commissioned by the National Union of Teachers, said. "Teachers described 'highly permissive' parents who admitted to indulging their children, often for the sake of peace or simply because they had run out of alternative incentives or sanctions."

As a teacher, we can help them by following those strategies that are pro-active and preventative. If we want cooperative children/students, they need to understand and be able to follow our rules and routines. Meeting this goal will ensure that we have a good learning environment

First of all, we will need to communicate our expectations for acceptable behavior. How will we do this? We will teach the expectations; simply telling children about our expectations is not enough. The following steps can help us to meet with success:

1. We can describe the acceptable behaviors with words and actions; we have to be specific. For instance, instead of telling them to use acceptable voices, we can describe the levels of noise for the various activities. We can ask them to demonstrate what voices are used during reading time, how to hear silence. We can ask them to demonstrate what voices are use during group work, they should speak relatively quietly to their group members. We can ask them who they should be talking to at group times. When this role play is complete, once again, we could ask the students to repeat the 3 types of voice levels and when they are to be used.

2. We can provide opportunities for children to practice expected behaviors. Again, this is like role playing but is quite necessary if we want children to fully understand our expectations. We have to be sure to focus on the students who experience behavior difficulties to demonstrate and tell us what the acceptable behaviors are in the various situations.


3. We can provide honest and ongoing feedback. We should always let our children know if they are behaving appropriately or if there is something they could be doing to improve their behavior. We should be specific when telling children what it is about how they're behaving. For instance, we may say that we really liked the way that they put everything away so quickly and quietly. We can give regular reminders and feedback, this will help to establish a great climate for learning.

4. What about the student that breaks the rules? This student should not be embarrassed. If there are other students around, we will need to bring the student to a spot that is away from the other students. We can ask him/her why he/she thinks we have asked to speak with them. Usually they can tell us. We can ask them how they should have handled the situation and what they'll do next time. We can include them in the consequence that should happen. Sometimes they might tell us that they should work alone or that they should give an apology. Our consequence needs to be logical and fit the behavior deviation.


5. Although we won't be able to predict absolutely every behavior problem that we may encounter, it will be possible to identify many of them. Once we are prepared for the most common behavior problems, we will be able to cope and be able to change many of them. It's often wise to prepare a list of potential behavior issues and preventative and reactive strategies that will lead to ongoing acceptable behaviors. Being prepared for and knowing how we can handle behavior deviations is half the battle!

Changing inappropriate behaviors takes time, All we will need is: patience, a 'stick to it' attitude, along with a very consistent approach. After all, it's long term gain for short term pain

The 31st Annual Day of Swami Brahmanand Pratishthan was celebrated virtually on Wattsapp.  The theme was '"Nature Reborn".Students performed  cultural program which included dance, music, singing etc. based on the five elements-Space, Wind, Fire, Water and Earth.  Parents and staff put in sincere efforts to train the students. A well coordinated program was presented by the staff members which was appreciated by an audience of over 250 members do visit our Facebook page to see the dances. songs, music performed on that day at  Principal's welcome note Coordinator's introduction note Prayers by students Group performance Group dance Music performance Karaoke   visit on Facebook to see all the videos. You can also see the videos on Instagram by following @swaayum